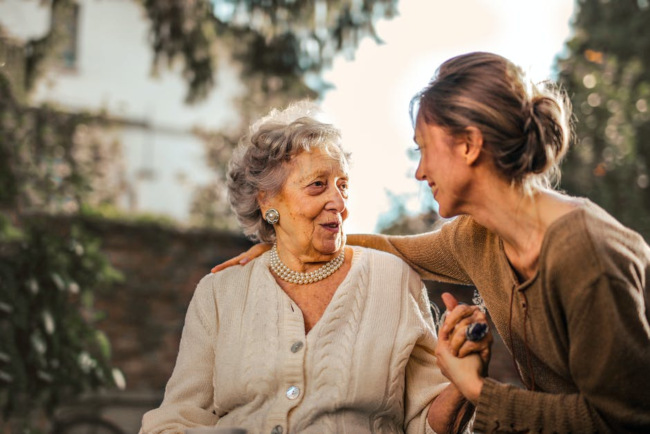 Years ago, Johanna had decided that when her mother, Jane, became frailer and more dependent, she would be her primary caregiver.  Although she knew she had other options – a good friend had been very happy with a home care agency that had cared for her mother and there was an assisted-living facility several towns away – she always believed that she would be the best person to care for her mother.

As a prelude to this, she and her husband had bought a house on a large piece of property that included a carriage house.  The intent was that Jane would move into the carriage house once she retired and sold the family home.

This all went according to plan when Jane, at the age of 82, sold her house and moved to be near her daughter.  At first, it was a perfect arrangement.  Jane ate dinner most evenings with Johanna and her family, and she had a front row seat in watching her two grandchildren grow up.   They lived on the same property, yet by having separate houses they had the best of both worlds – plenty of time together and their privacy.

Things worked well, at least, until Jane suffered a minor stroke shortly after her 92nd birthday.  Fortunately, after being hospitalized and spending some time in rehab, Jane was able to return home.   While the doctor said that she had suffered no permanent damage due to the stroke, it was quickly apparent to Johanna that since the health scare her mother had slowed down both mentally and physically.  A woman who had worked until her 80th birthday as a financial planner, and who had been active in the community, Jane was now rarely out of bed and dressed before noon.  She was less engaged in conversation and, after being such a big part of their lives, seemed generally uninterested in her grandchildren’s activities.

In any case, true to her plan, Johanna took control of the situation.  She began to spend more and more time in the carriage house with her mother.  She was there to help her mother get washed and dressed in the mornings, she prepared her meals, and she was there to tuck her into bed at night.  This lasted for about six months, or until Johanna began to experience the kind of burnout that is not uncommon among family caregivers.  She became more irritable at home, starting fights with her husband and children, was feeling an enormous amount of stress, and was constantly exhausted.  She found, to her amazement and chagrin, that she resented her mother’s increased dependence on her.

This came to a climax when her mother fell one night when she got up to go to the bathroom.  It was not until the next morning that Johanna found her lying on the floor.  It clinched in her mind that it was time.  She needed help.  That afternoon, she called the home care agency her friend had used.

Six months later, Johanna still feels in charge of her mother’s care.  Only, she has Roberta, the home health aide, to help 30 hours every week.  With Roberta there, Johanna gets to spend more quality time with her family and doesn’t feel that she’s juggling so many balls.  Her mother also seems happier, as Roberta not only assists her with the Activities of Daily Living, but provides her with an important social outlet.  Johanna also knows that should her mother’s health decline further, the home care agency – which she has total trust in – will be able to provide her with a live-in aide.